NEHC sends our deepest condolences to John and the family. Jay was a wonderful Equestrian and person. She will be greatly missed by the equestrian community. 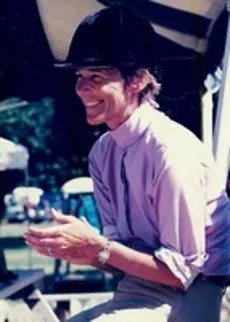 Jessie Sargent of Middletown, RI died Thursday September 1, 2022, at the age of 72. Jessie (Jay) started riding horses she was a child and had been a professional for over 30 years. In addition to attending competitions throughout the region, Jay managed 11 shows a year at the facility she owned, Sandy Point Stables.

Jay’s students and the horses she trained were not only successful in New England but around the country as well with wins at the Connecticut Junior Equitation Medal Finals, N.E. Equitation Finals, top ribbons at the USEF Pony Finals and more. Jay trained Tidy Up the winner of the 1977 small pony finals and trained the Reserve Champion large pony Llandfalle Logic at the 1985 pony finals.

During a trip to the Caribbean in 1998, Jay encountered a wild bottlenose dolphin. That meeting was to change her life forever. Being passionate about animals and seeing an exciting opportunity, Jay began swimming with the dolphin every day. That led to more encounters with other pod members. Over the next 24 years, Jay spent more and more time with the dolphins and their offspring. She wrote two books about her encounters and observations and wrote a children’s book about the evils of capturing and keeping wild dolphins. In 2021, Jay was contacted by the Discovery+ channel that did an hour-long program about her experience with the dolphins.

Arrangements are by the O’Neill-Hayes Funeral Home. For more information, please visit www.oneillhayes.com.

Hi All Cindy is moving the Weeks of August 16 - September 3, 2021. I will still be receiving emails and will have access to the computer after August 26, 2021. I just may be a little slower at getting back to you. Email address remains the same cindy@nehc.info new...

To our members: This past year has brought many challenges to our community and our way of showing. I applaud everyone who ran shows with all the restrictions and their exhibitors who followed the covid rules. As we go forward, there is a light at the end of the...

Shows offering the Adult and Junior Hunt Seat Medal. The Medal class for the 2021 show season can run with 3 entries instead of the 4 entries stated in the rule book. Class can be combined if needed. One of each medal at a 1 day show, Two of each medal at a multi-day...

2020 was a year that we all will all remember.  As we do not want to dwell on our past year New England Horsemen’s Council looks forward to beginning a new year competing at our favorite shows.  The goal is to get back to some sort of normal while maintaining the...

Due to the 2020 NEHC Championships date change and the limited number of NEHC Medal qualifying classes/horse shows as a result of COVID, the NEEC has modified the 2020 qualifying criteria in the following ways:   All junior NEHC members who are juniors in their...